This is the second on a series of three posts about glasses.

When glass balls are broken, many meniscus-shaped glass plates are produced. To make positive lenses for farsighted (presbyopic and hyperopic) eyes, it was enough to grind the concave side plane of these plates. It remains a mystery why then it took about 150 years to realize that to make negative lenses for nearsighted (myopic) eyes, it was enough to grind the other—convex—side of these plates.

This, as already suggested by Tomás Maldonado in the beginning of the twenty-first century, has to do, first, with the link between the progress in the glass and crystal industries, and the invention of spectacles; and second, with the social, economic, and cultural need to correct the visual problems of the farsighted in 1290, and the nearsighted in 1450.

The latter can be used to shed light into the existing debate between technological determinism and sociological constructivism. The former advocates technology is the main thrust behind changes in society;  the latter advocates society itself is the cause of all changes taking place. It remains debatable whether it is design which shapes society, in which case the invention of spectacles could be understood as a serendipitous milestone that changed society forever; or whether it is society which shapes design, in which case the invention of spectacles was not as serendipitous as it may seem, and it happened when it did because society needed it to happen then.

It is fair to think that by default farsighted people worked in areas in which good long-distance vision was indispensable (e.g., hunter, soldier, farmer, etc.), while nearsighted were present in areas in which good short-distance vision was indispensable (e.g., calligrapher, engraver, tailor, etc.). Thus, normal-sighted people who decided at a young age to do long-distance jobs had a worse time when they grew older than those who decided to do short-distance jobs.

Furthermore, this happened in a late medieval society that was witnessing the spread of literacy, education and universities, and a demand for a larger work force to fill short-distance jobs. Such a society not only could no longer afford the migration of presbyopic individuals from short-distance jobs to long-distance ones, but could also use a reverse migration. Therefore, as serendipitous as it may seem, the invention of spectacles happened at a time when society was in need of such an item; people were looking (and waiting) for them to happen. It is not surprising either that the design thinking process that lead to the invention of spectacles started in monasteries, real centers of intellectual progression and education of the epoch.

Negative lenses for the nearsighted came over a century later, maybe because earlier society did not require them as much. On the other hand, while Roger Bacon, among other scientists, had provided in the late thirteenth century a vague scientific description of the nature of positive lenses at the time of their invention, the necessary scientific study of the nature of lenses (positive and negative) and the human eye only came almost three centuries later, proving that science is not always in tune with innovation.

Before Johannes Kepler published “Astronomiae Pars Optica,” the foundation of modern optics, in 1604, Johann Gutenberg had already invented the printing press, which led to a sharp increase in literacy that broke the monopoly of the literate elite on education, and strengthened the emerging middle class. As a result, the printing revolution was promptly followed by a noticeable increase in both the demand and the price of spectacles, and new renowned spectacle makers emerged outside the Italian peninsula. In particular, in Nuremberg, within the German border, secretive makers were responsible for two key innovations that contributed to the emergence of spectacles as mass-produced items: they substituted blown glass balls by blown glass cylinders from Bavaria and Bohemia as their glass source, and realized that grinding both surfaces the quality of their lenses improved considerably. 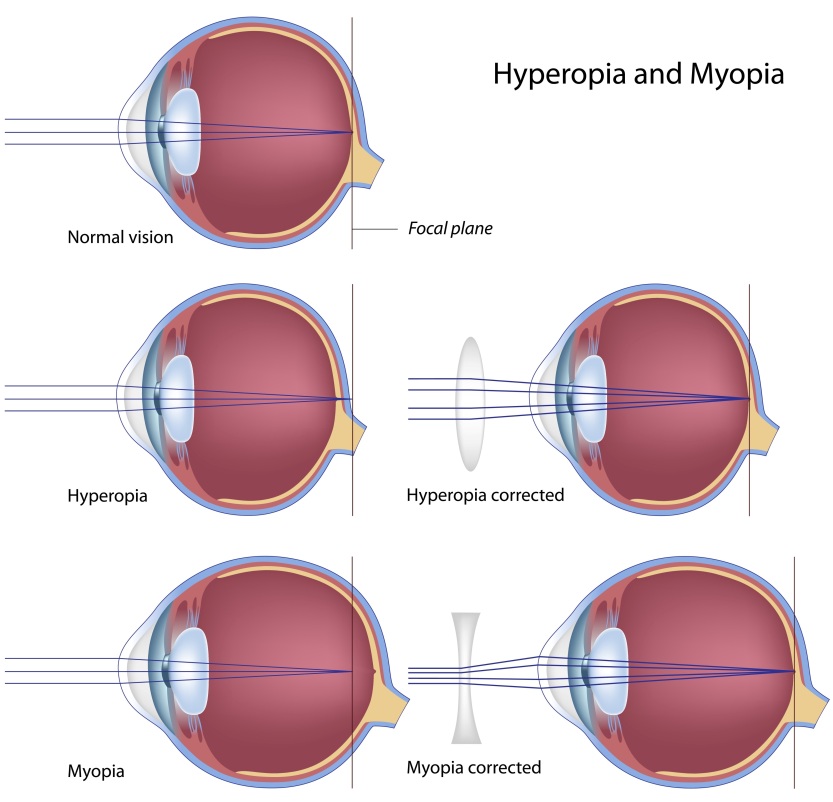 A complete scientific picture of the optical nature of the eye has been drawn ever since. The necessary scientific knowledge came—and not the other way around as in the case of spectacles—before the invention of contact lenses in the final years of the nineteenth century, and the introduction of (refractive) eye surgery used to improve the optical power of the eye (thus decreasing, or eliminating, its dependence on spectacles or contact lenses) during the second half of the twentieth century. Compared to spectacles, contact lenses are less affected by wet weather, provide a wider field of view, and are more suited for most active sports. Despite this, and that in the long term refractive surgery might be cheaper for some, the fact is that people are still wearing glasses.

Modern spectacles are typically supported by pads on the bridge of the nose and temple arms placed over the ears. Nevertheless, albeit similar, spectacles’ designs have not always looked the same.

The first Venetian spectacles were formed from two magnifying glasses mounted in a frame with a handle made of bone or wood connected together through the ends of their handles by a rivet. Shortly after, Nuremberg makers removed the rivet from the design and introduced new materials such as leather, horn, and copper wire. It was not until the beginning of the eighteenth century when London optician Edward Scarlett, facing the problem of stability, perfected the design of temple spectacles, which were not immediately successful. While other designs, such as binocles-ciseaux (held by scissoring stems), lorgnettes (held by a handle), and pince-nez (held by pinching the bridge of the nose) were considered, as the twentieth century opened, a combination of an emphasis on style, an improved plastics industry (incorporated in lenses and frames), and convenience made temple spectacles the standard.